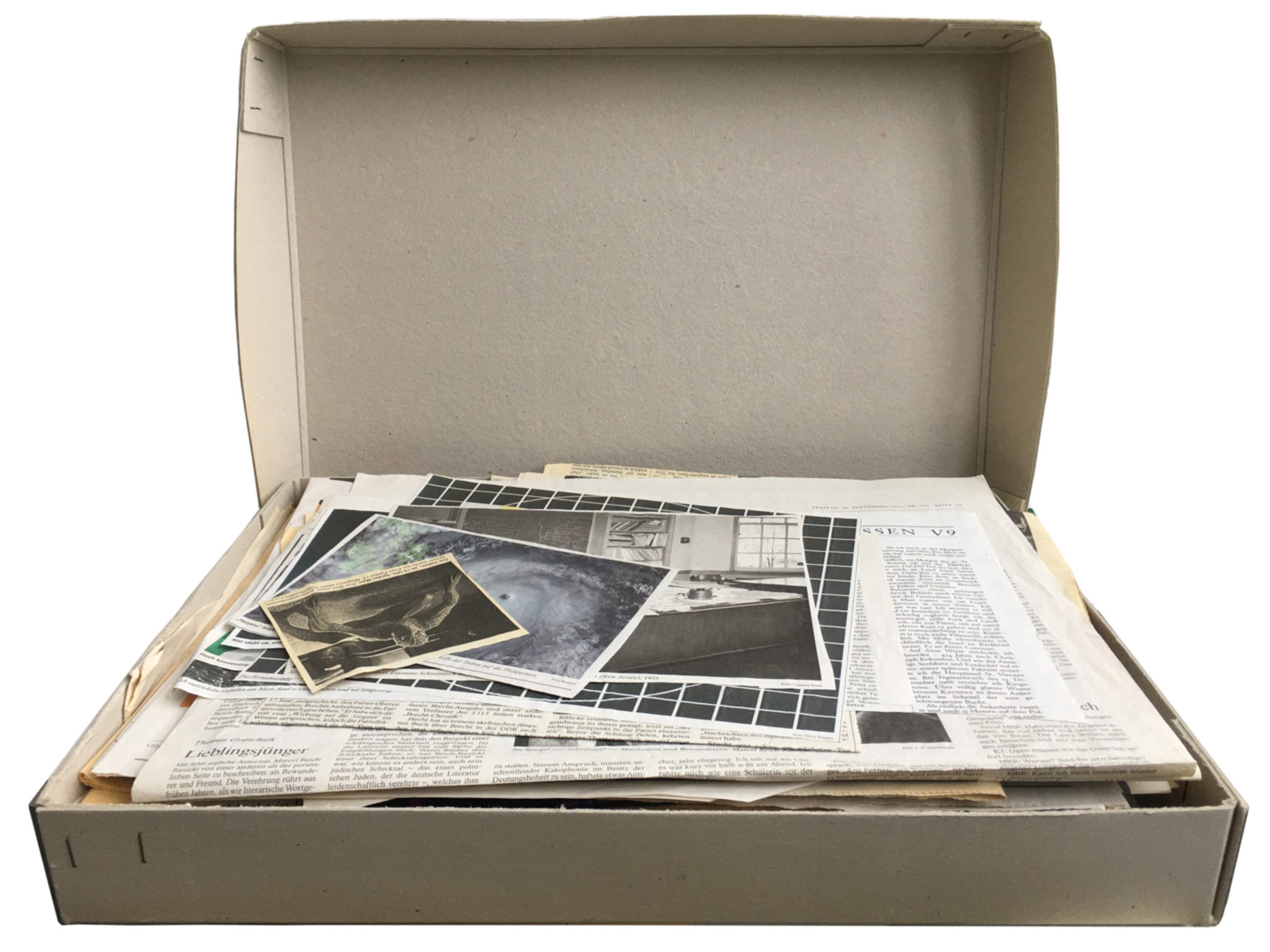 EN
Daniela Comani's video work Archive in Progress (2015/2020) begins with a telling newspaper headline: “Die Welt in Unordnung” ("The world in disarray"). In the approx. 40-minute video loop, the artist compiles newspaper clippings and photographs from magazines and other media in 2-second sequences. In this "archive in progress", Comani translates the illustrated (newspaper) news, which she has been collecting as analogue found footage material for thirty years, into the medium of moving images.

At first glance, the photographs seem to be strung together at random, they can be assigned to different time levels, they are black and white or in colour. They are all documents of "current events". The events depicted are located worldwide and are of (supposed) historical significance. From time to time, dates appear, as do short captions, lines of text and headlines in German, Italian or French. The newspaper clippings and photographs can be assigned to different subject areas: Politics, sport, economy, culture, current affairs. They show major events, crises and wars of the 20th and 21st centuries. Portraits of well-known personalities alternate with pictures from the world of sport, catastrophes, and political upheavals. An archive that, as the title suggests, is constantly expandable.

As we look at them, different thematic blocks emerge: We see freedom fighters, democrats, and pioneers of various movements as examples of careers fought for (sometimes under difficult conditions): Angela Merkel, Lady Di, Muhammad Ali, Nelson Mandela, Serena Williams, Che Guevara, Alice Schwarzer, Rudi Dutschke. There are a noticeably large number of women among the portraits shown. In addition, the viewer encounters numerous images of fascism, dictators, and despots. The images have recognition value, some are well-known "icons".

The video is an examination of the images that are circulated en masse by the media. One often finds recurring image patterns in photographic reporting - for example, a stereotype that could be named "big men who make history". In her work, Daniela Comani shows precisely these patterns and at the same time breaks them by setting her own emphases. She highlights the female protagonists and subtly and critically changes the supposedly fixed view of the course of world history in her archive.

In this way, she makes it clear: Media (as well as art) are subjectively shaped, they always show only a selection of the possible. Certain aspects are emphasised, others excluded. The ideological, political or cultural "messages" visualised by the images influence public discourse – they can activate us, become relevant for our actions. Images influence our perception of the past and the present, and even constitute them in some part. We remember images and remember through images that are representative of an event. Thus, the representation of an event in the media gains greater importance than the event itself.

Daniela Comani's Archive in Progress shows that world history, anchored as collective memory, is also guided by subjective perspectives, by media and their image patterns. History can be changed, overwritten, and there are always other, alternative perspectives. This can currently be observed in various political or ideological contexts, or, as with Comani, from a gender-critical approach.